“Being non illusional but realistic, my graphic expression or form becomes one and same as my state of consciousness and intuitive perception or awareness of the microcosmos and its process of becoming. The ink dropping into puddle as a mode of expression, by being one and same as the content, resolves itself within its own body, existing only for its own quality of energy, process, movement, efflux and metamorphosis.

It becomes thus the perceived reality itself. The hydraulic-chemical behavior of fluids and microparticles of the medium in motion creates a new micro-geography undergoing constant and continuing metamorphosis, diffusion and efflux until the fluid evaporates arresting thus the movement in tis cadence.

This reality therefore must be perceived and appreciated firstly as a kinetic reality requiring awareness of its process of becoming into the arrested stages, and secondly as a micro-cosmic reality requiring viewing at a greatly reduced distance and preferably with the help of magnifying glass. Only then will the experience of the new kinetic microcosmos acquire concreteness." 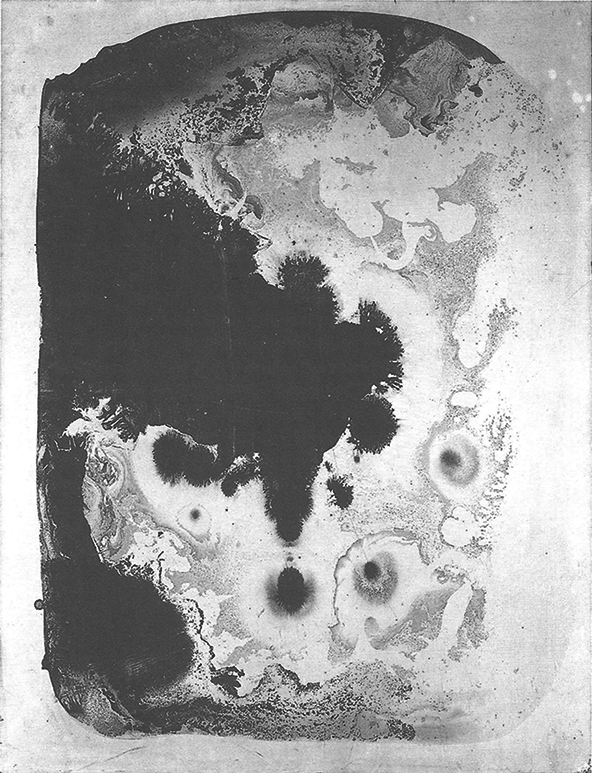 One of his 1961 drawings (untitled), Ink dropped on wet paper.

​Invitation to George’s own exhibition at the AG Gallery in 1961.