1880
Helmuth Viking Eggeling is born on October 21 in Lund, Sweden to a family of German Origin. His father runs the Eggeling Music Shop and Eggeling’s interest in music begins at a very young age.

1897
Eggeling emigrates to Germany where he takes a job as a bookkeeper. He begins to study art history and painting.

1902
Eggeling becomes interested in exploring new ways of communication in his art and wrote that he “had made all kinds of attempts to construct a new communication machine.”

1911-1915
He lives in Paris, France and continues to study drawing and painting.

1917
Eggeling settles in Zürich, Switzerland and becomes involved with a group of artists associated with the city’s Dada art movement.

1918
Tristan Tzara introduces Eggeling to German artist Hans Richter. The two artists work together for the next three years. Each artist had been exploring the abstract properties of form.

1919
Eggeling and Richter move to the estate of Richter’s parents in Klein-Kölzing, Nieder Lausitz and the artists carry out a series of experimental drawings based on the rhythmic arrangement of formal elements on paper. The studies culminate with Richter’s first scroll picture Preludium and Eggeling’s Horizontal – Vertical Mass. The artists begin to consider the medium of film.

1920
Eggeling and Richter write a pamphlet called “Universal Sprach,” a manifesto that linked abstract form to a universal language understood by all. Eggeling carries out his first cinematic attempt based on the drawn roll of film Horizontal Vertical Orchestra.

1921
He visits his native country of Sweden twice during this period. Eggeling purchases a motion picture camera and continues his work in film. He begins the experimental abstract film Symphonie Diagonal based on a set of scroll pictures created in 1920.

1924
A version of Symphonie Diagonal is shown privately shown in Berlin, Germany, under the auspices of the Curator of National Arts

1925
On May 3, Symphony Diagonal’s final version is shown publicly for the first in Germany. Viking Eggeling dies on May 19 at the hospital Berlin – Steglitz of heart failure at the age of 45.

Eggeling had succeeded in articulating a complete syntax of form-relationships which he called Generalbass der Malerei, Bass Motif of Painting. We immediately became close friends. He was invited to live on the estate of my parents and there we worked together for the next three years. In this way, Eggeling could finish his most important work. He had been preparing himself by his “Elementary Tablets” and his “Orchestration of the Line.” On the basis of polar relationships, by the interplay of contrasts and analogies, an unlimited vocabulary developed: a vertical line was accentuated by a horizontal, a strong line contrasted with a weak one, a single line gained importance from many lines, and so on.

Amazingly enough, Eggeling came, so to say, from the same corner as I. He was the youngest of many children, I don’t know how many. His father ran The Eggeling Music Shop in Lundt, Sweden; so he grew up in an ambiance of music. Though, first, he was a bookkeeper, in order to make a living. He became enamored of art and finally became an art teacher at the Lyceum in Zuoz, Switzerland, teaching drawings after nature, after plaster of Paris things. And it was really his teaching abilities, his teaching necessities, which had led him to this type of deep analysis of the elements of drawings. Because he had to tell his students how to develop a work. He had to make it so very clear in his mind that finally, at a certain instant, it became a really creative moment for him. His didactic qualities led to a new understanding of the elements of expression. He became an artist of a special kind in a special way.
I profited enormously from his experience. He was far ahead of me. On the other hand, he needed my spontaneity. It was one of those rare occasions one finds only once in a life by the grace of destiny and when one is young. For the next three years we were inseparable.

In these years, we made our first development of a form theme – the growing and declining of single forms and a form group on long paper scrolls.

And from scrolls we finally got to the problem of film. I called my first ventures in film, Rhythms.
Having accompanied me in April, 1919, to my parents’ farm at Klein-Kölzig, he stayed with us, with his wife, until January, 1922, when our property was sold.

Eggeling died at the Steglitz Hospital in Berlin on May 19, 1925. Fritz Schupp, his nephew, his last girl friend the dancer, Inge, and I were at his death bed. At his funeral were present twenty to thirty artists who had known and respected Eggeling during his lifetime and three of his girl friends. I spoke at his grave and, after me, Raoul Hausmann. His memory is still alive today among us.

Hans Richter by Hans Richter, edited by Cleve Gray in 1971: page 38, illustrated in a similar version. 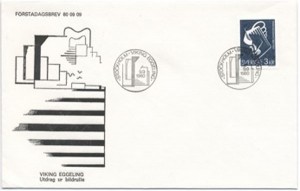 Viking Eggeling (1880–1925) was born in Lund, but after emigrating from Sweden in 1897 he was active in Italy, France, Switzerland and Germany (he died in Berlin). Eggeling never lost contact with his native country and he visited Sweden in 1921 and 1922, and he stayed in touch with his family all his life. He is one of the few Swedish artists and film makers of international renown and he was the only Swedish Dadaist.

Viking Eggeling began his filmatic experiments in 1920. His first attempt was to make a film after the first drawn roll of film he had made, “Horizontal Vertical Orchestra>’. In the spring of 1923 he started working on the only film that has survived, Diagonal Symphony”. It was completed in the autumn of 1924 and was first put on at a private showing in Berlin the same year. “Diagonal Symphony” is one of the first abstract, animated films in motion picture history. It is in black and white, silent and about 7 minutes long.

Viking Eggeling regarded his studies and sketches for his cineastic experiments as scores. His films were not meant to be shown with music, they are music. One of the basic concepts in his work is communication, evident even in 1902 when he wrote that he “had made all kinds of attempts to construct a new communication machine”.