Liberating Viewers, and the World, With Silliness 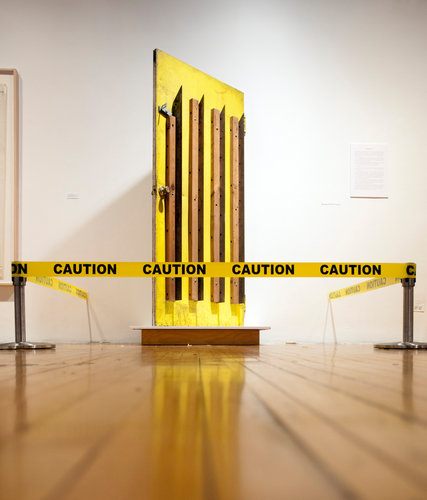 Fed up with being hounded by the New York State attorney general’s office over alleged zoning violations in the early 1970s, George Maciunas, the real estate developer, graphic artist and leading light of Fluxus, the international network of Conceptual artists, created an artwork that doubled as a defense against subpoena-wielding enforcers. He attached four industrial-size paper-cutting blades to the grungy yellow front door of his Manhattan apartment. In a 1975 issue of his Fluxus Newsletter, Maciunas (pronounced ma-CHEW-nus) described his “event in progress,” or “Flux Combat with New York State Attorney (& police).” Therein he itemized his “arsenal of weapons,” which consisted of “humorous, insulting and sneering letters to the attorney general” and his “Flux Fortress,” which included the bladed front door and, for intruders who got past that, booby traps and “funny messages” left behind trick doors and hatches.

That front door is now on view in “Fluxus and the Essential Questions of Life,” at the Grey Art Gallery, New York University. It is a historically fascinating and excellently produced show of works that mostly masked revolutionary intentions behind deceptively modest, small-scale pieces of assemblage, print making, performance and wordplay.

What Fluxus was is a matter of some debate. Was it an art movement, an anti-art movement, a sociopolitical movement or, as the artists themselves tended to protest, not a movement at all?

Anyway, it did have a name, conceived by Maciunas (1931-78) in 1962, and a philosophy, which basically argued against all fixed notions about everything, including the cult of genius and the distinction between art and life. It involved a regular cast of players, including Nam June Paik, La Monte Young, George Brecht, Alison Knowles and Yoko Ono. These and some 50 others are represented in this show.

Organized by the art historian Jacquelyn Baas for the Hood Museum of Art at Dartmouth College, where it made its debut last spring, the exhibition displays more than 100 objects, documents, ephemera and films. It is laid out thematically — according to questions like “Art (What’s It Good For)?,” “Nothingness?,” “Death?” and “Love?” — bringing considerable lucidity to a genre that can seem otherwise bewilderingly diverse and elliptical.

You could think of Fluxus as an international, utopian conspiracy to alter the world’s collective consciousness in favor of noncompetitive fun and games and other peaceable and pleasurable pursuits. Their weapons of choice were feeble jokes, verbal and visual puns, satiric publications and instructions for absurd performances. Bypassing the commercial gallery system, Fluxus novelties were meant to be sold cheaply by mail and in artist-run stores.

Many works were in the form of “Fluxkits”: transparent plastic, compartmentalized boxes containing small found objects. Maciunas’s “Excreta Fluxorum” (1973) is a collection of droppings from various animals, including cockroaches, turtles and rabbits. A compartment for a unicorn contains a white glass marble. Thus the method of Fluxus madness: use silliness to liberate the viewer from the usual categories of knowledge and the structures of power that keep them in place.

Fluxus can seem insular in its wry Conceptualism, but it was spiritually in tune with the anarchic wing of the 1960s counterculture represented most famously by Abbie Hoffman and Ken Kesey and the Merry Pranksters. In that regard the show does little to set Fluxus in the broader social context of its time. But an informative separate exhibition in the Grey’s lower gallery examines where it fits in art historically.

Organized by Julia Robinson, an assistant professor of art history at New York University, “Fluxus at NYU: Before and Beyond” includes works by Jackson Pollock, John Cage and Robert Rauschenberg; a delightful film of a performance by Stuart Sherman; photographs of Happenings; a pair of pears cast in shiny aluminum in 1964 by the Fluxus artist Robert Watts; and lots of fascinating textual material.

Fluxus art was rarely overtly political. An exception is a poster by Maciunas from about 1966 in the form of an American flag, titled “U.S.A. Surpasses All Genocide Records.” The red stripes are made of letters spelling out murderous statistics for Kublai Khan, Spain, Stalin, the Nazis and the United States.

More typically understated is a wooden box by Robert Filliou, “Optimistic Box No. 1” (1968). A pink title label on top reads, “thank god for modern weapons”; inside are a rock and another label that says, “we don’t throw weapons at each other any more.” Today the first thing many viewers will think of might be the pet rock of the 1970s, not the Vietnam War.

Despite their contrarianism, Fluxus attitudes were readily assimilable, superficially at least, by popular culture. A mock tabloid created by Geoffrey Hendricks announcing the 1978 death of Maciunas was illustrated by a photographic montage picturing him in papal regalia over a caption explaining his outfit as “one of his many disguises used to elude the attorney general.” This was long before The Onion newspaper hit the streets. (With his features like “Stupid Pet Tricks” and “Will It Float?” David Letterman could be a secret Fluxus artist.)

Today the most famous of all Fluxists is Ms. Ono, who now has a billboard pleading “Imagine Peace” towering over a highway in Houston. She conceived it 10 years ago in response to the events of 9/11. Unfortunately, it has not lost its poignant relevance. 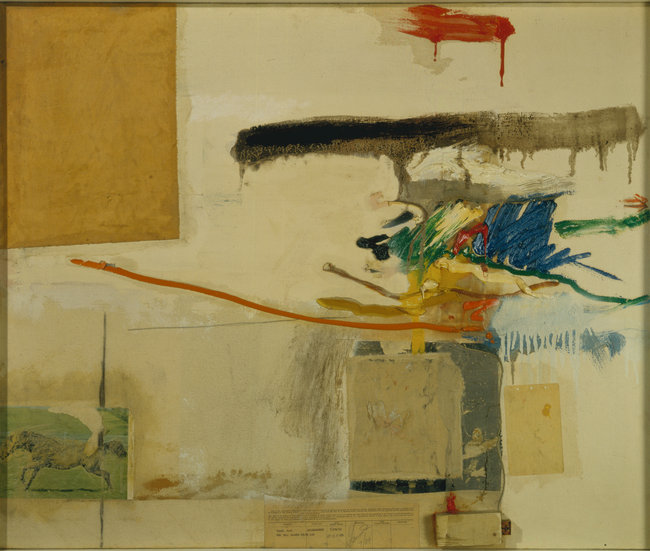 “Fluxus and the Essential Questions of Life” and “Fluxus at NYU: Before and Beyond” are on view through Dec. 3 at the Grey Art Gallery, New York University, 100 Washington Square East, Greenwich Village; (212) 998-6780, nyu.edu/greyart.

FLUXUS AND THE ESSENTIAL QUESTIONS OF LIFE at Grey Art Gallery 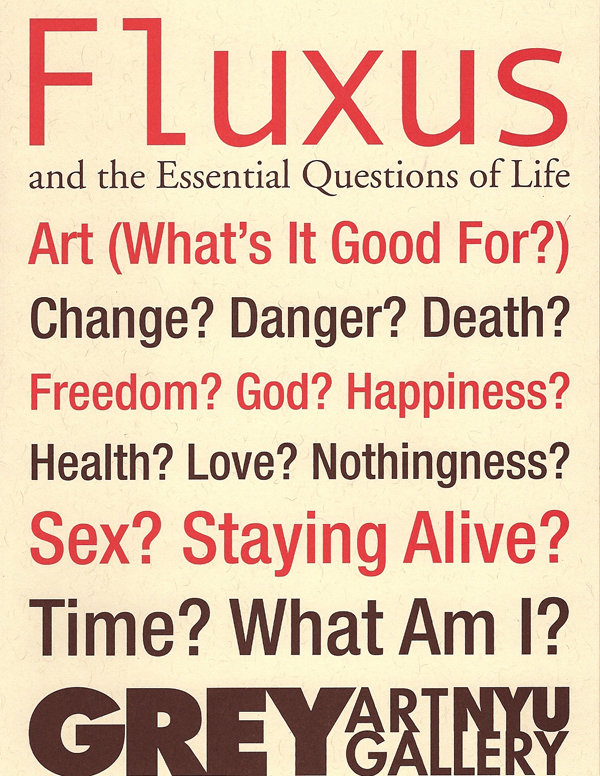 Fluxus—which began in the 1960s as an international network of artists, composers, and designers—resists categorization as an art movement, collective, or group. It also defies traditional geographical, chronological, and medium-based approaches. Instead, Fluxus participants employ a “do-it-yourself” approach, relating their activities to everyday life and to viewers’ experiences. Offering a fresh assessment of Fluxus, the show and its installation are designed to encourage multiple interpretations, exploring what they can teach us about our own position in the world and the works’ relationships to key themes of human existence. Fluxus and the Essential Questions of Life features over 100 works, including documents, objects, event scores (short scripts outlining actions to be performed), and Fluxkits (collections of scores, games, and ephemera). Curated by Jaquelynn Baas and organized by the Hood Museum of Art at Dartmouth College, the exhibition draws extensively on the George Maciunas Memorial Collection at the Hood and is accompanied by a fully illustrated catalogue.

Also on view at the Grey:
Fluxus at NYU: Before and Beyond