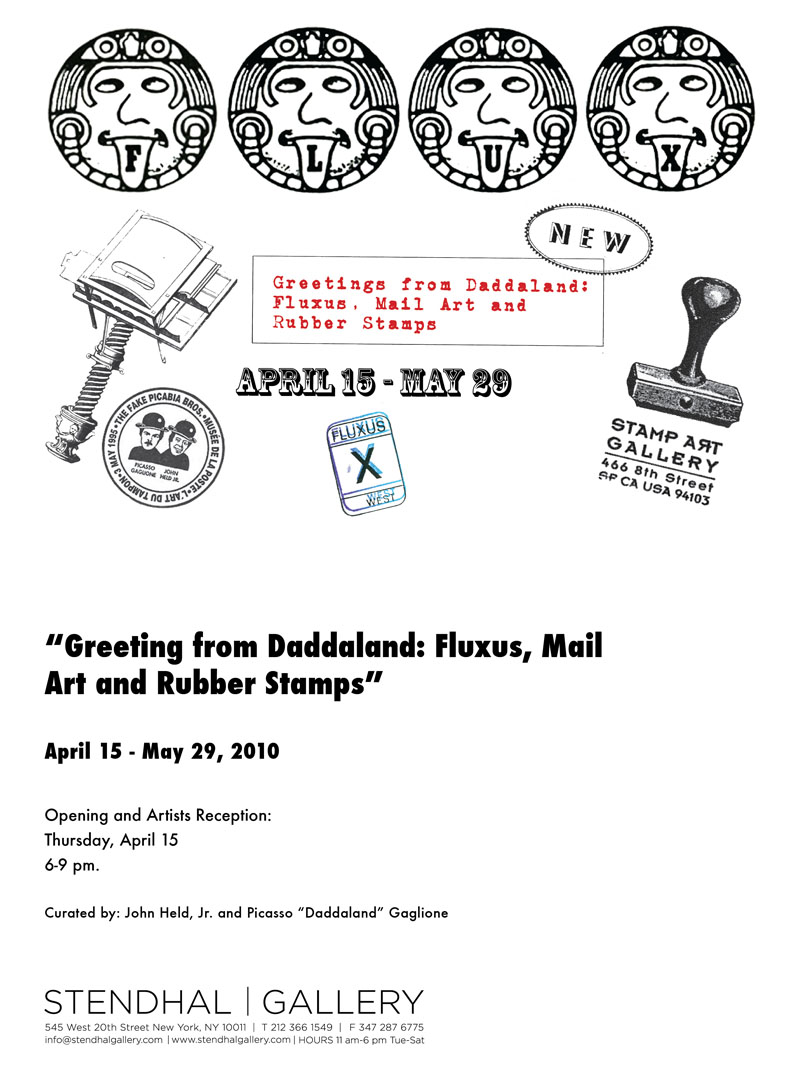 The Stendhal Gallery will present the exhibition, “Greetings from Daddaland: Fluxus, Mail Art and Rubber Stamps,” opening April 15 and continuing through May 29. The exhibition is drawn from the collections of John Held, Jr. of San Francisco and Picasso (Daddaland) Gaglione of Chicago, collectively known as The Fake Picabia Brothers.

The present Stendhal Gallery exhibition continues the exploration of avant-garde art Gaglione and Held began tracing together in the 1970s. Gaglione and Held presented a showcase for Fluxus, Mail Art and rubber stamp art at The Stamp Art Gallery in San Francisco during the mid-1990s. The current exhibition documents the gallery’s activities through posters, exhibition catalogs, performance documentation, mail art, artist postage stamps, rubber stamp box sets made to commemorate the various exhibitions and excerpts from past Stamp art Gallery exhibitions.

Coupling his passion for collecting sets of antique rubber stamps (dating from the 1920s), and his penchant for Fluxus inspired works, Gaglione began creating rubber stamp box sets to accompany exhibitions by contemporary artists and to honor historic figures of the 20th Century avant-garde, who had influenced his artistic practice.

In putting together the rubber stamp box sets, Gaglione and Held followed the example of Fluxus impresario George Maciunas in his production of Flux-Kits. These inexpensive yet elegant multiple editions set the tone for the production of these post-Fluxus editions.

In the production of the rubber stamp boxed sets and gallery exhibitions, Gaglione and Held, worked closely with noted art historians. Their exploration of Yves Klein’s “Blue Stamp,” created and mailed for a 1957 gallery exhibition, brought them into contact with the late Pierre Restany, the French critic who formulated Nouveau Realism. Their work on the history of French/American artist Arman, lead Held to the artist’s studio in New York City, where he not only was interviewed, but created original drawings to be made into rubber stamps.

The Stendahl Gallery exhibition will recreate some of the more notable shows Gaglione and Held presented in the past, including the exhibition of Dutch artist, Ruud Janssen’s, Rubber Stamp Archive, which includes rubber stamp impressions by Fluxus artists. Janssen will lecture at the gallery with curator John Held, Jr. Contact the gallery for the specific date and time.

Other artists shown in the exhibition include New York Correspondance School artists Ray Johnson and May Wilson; Arman’s drawings produced for the Stamp Art Gallery to be made into rubber stamps; postage stamp artist buZ blurr; a series of crop circle rubber stamps by Robert Rocola and rubber stamps depicting pioneers of 20th Century avant-garde art by M. B. Corbett.

A complete collection of over fifty Stamp Art Gallery catalogs were previously acquired by the Museum of Modern Art Library, New York. Held has also compiled collections for the Getty Museum and the Archives of American Art, Smithsonian Institution. The works on display are drawn from his personal collection with new rubber stamp works produced by Gaglione, now living and working in Chicago under the rubric of Stampland.